The One and Only Artemis

I'm very, very anxious and wary of people, online and in real life, so don't be offended if it takes a little while for me to trust you.

English, Spanish, a lot of German and Serbian, and a tiny bit of Icelandic

Either agnostic or atheist

Mean Girls (both the movie and the musical), Heathers (the musical a little bit more than the movie, but the movie is still good), SIX, Dear Evan Hansen, the Beetlejuice movie, Be More Chill

Hi, I'm OBat406, also known as Bat. I also go by Artemis or Art. I will do charart for you, but exclusively black or white cats. I suppose I could try to do a colored cat, but it will not be good so don't expect a lot ^^.

All About Me![edit | edit source]

Anyways, hello! My name is Artemis Sun (no, it's not, but that's just what I call myself on the Internet) and my favorite Warriors book is Shattered Sky. My favorite characters are Hollyleaf, just because I admire her faith in the warrior code, Needletail, because she is a straight-up boss, and Clear Sky, because I love to read about him (for some friggin reason).

My favorite non-Warriors book series is Wings of Fire. It's so good and I highly suggest it to anyone who likes Warriors or fantasy books. I also love comedy and light shows. I'm a huge theater nerd and I absolutely love the Heathers musical, the Mean Girls musical, Hamilton, SIX, Dear Evan Hansen, Beetlejuice, and Be More Chill, not in that order. My dream is to play J.D. in a Heathers production, Connor Murphy in a Dear Evan Hansen production, Betelgeuse in a production of Beetlejuice, and/or Catharine Parr in a production of SIX.

I created the character Sunstar along with MoonClan with my friend Owlfeather. My very first OC on this wiki is Sunstar, and I worked really hard on her. I love to draw and sketch on paper, but I am hopeless when it comes to animation programs. I have been drawing for a few months, and I've made some impressive stuff in my sketch pad.

I am an writer and I am writing a fanfiction called Rise of the Moon, a non-Warriors series called The Crystalia Chronicles, and a sequel/companion series called The Adventures of Dusk and Ash. I'm also a good editor for anybody writing out there! I'm not an admin, but I'm always on the wiki. I also like to go on patrols around, looking at random characters and commenting like crazy. Please comment and tell me how I can improve on my characters! Thanks!

My fursona (as seen on the Moonstorm page) is a black fluffy she-cat with blue eyes and a bushy black tail. It's simple and elegant, and I'm pretty proud of it. 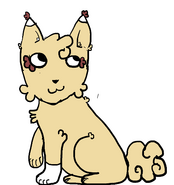 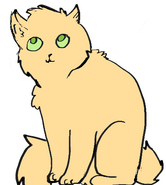 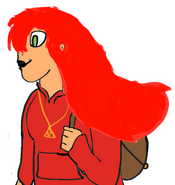 The protagonist of my book series, Ash (1/8/21)
Add a photo to this gallery

I'm also trying to get the Drama-Catcher badge. I don't have a lot of photos of my own to upload, so if anybody wants human art done, I'm up for it!

Rise of the Moon[edit | edit source]

Rise of the Moon follows three cats: Goldenstar, Sunstar, and Owlfeather as MoonClan emerges from the tunnels beneath the lake.

Storm of Clans follows two cats: Dawnflame and Neverbreath as they discover four more Clans and come to the realization that MoonClan is not where they should be.

Echo of the Stars[edit | edit source]

In a prequel to the Sunstar fanfictions, the evil MistyClan and the rebellious WillowClan wage a war that threatens to tear themselves apart.

A sequel to the prequel, this book takes place a year after the Great Battle between WillowClan and MistyClan and introduces the shadowy new Stars.

Note: Those with black coloring have not been created yet[edit | edit source]

Retrieved from "https://warriors-ocs.fandom.com/wiki/User:OBat406?oldid=100150"
Community content is available under CC-BY-SA unless otherwise noted.

Ranked #3
on this wiki