This character is not mine! This is a fan page for Razmerry's The Dog Star!
Spoiler Warning: Plot and/or ending details follow.

Place of No Stars

Place of No Stars Resident

(This article is still a work in progress!)

Flamesnout is a dark ginger tabby she-cat with a darker muzzle and bright yellow eyes. [2]

Flamesnout was a SnowClan warrior under Owlstar's leadership in the lake territories. She was born as Flamekit to Quailfur and Sparkbelly just a moon before the end of Seedstar's reign. As a warrior, she met a loner, Haystack, and fell in love with her. She brought her into the Clan, and Owlstar welcomed her and renamed her Hayfrost, despite the Clan's hatred of her looking like Seedstar. The two eventually ended up becoming mates. One day when Flamesnout was on a patrol with the senior warriors, Kestrelpad and Blackfern, she ended up attacking and killing them. She tried to cover it up, but Hayfrost found out, and broke up with her, leaving SnowClan in process. She later attacked Stoatscratch, but ended up running away during a snowstorm, dying of Hypothermia, and descending to the Place of No Stars.

After suffering for moons in her afterlife, she eventually had her trial. Applestar, the leader of StarClan, let her into StarClan with a warning. However, when it was time for Harestrike's reincarnation ceremony, she sprung at them in fury and ended up falling into the abyss, finding herself in the living world, fully aware and alive.

She spend a few moons as a loner, going by the name Flame, but eventually made her way into SnowClan and got accepted as a member by Deerstar, despite most of the Clan's dismay, finding that no one alive remembered her. She was trained by Maplestorm as an unofficial apprentice, and when it was time for her warrior ceremony, Applestar possessed Deerstar and forced him to rename her Houndheart, referring to the name of Houndstar, the leader of the Dark Forest.

Flamesnout is walking to Harestrike's reincarnation ceremony bitterly, and is interrupted by her friend, Shellspring, talking to her. They both make their way to the tree over the abyss, and Flamesnout lays above the branch where Harestrike is sitting. Just as the ceremony begins, Flamesnout is overcome by fury and knocks them away from the pool. She quickly regrets it, though, but is clawed in the face by Harestrike. She flings them away, then jumps down from the branch and lands in the abyss. Flamesnout finds herself in the living world, and panics as she realizes she isn't supposed to know who she is. She crawls into a bush and sleeps, and when she wakes up, she lives life as a loner, almost getting caught by a SnowClan patrol several times. 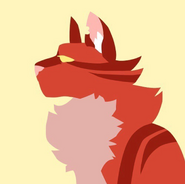 Flamesnout on the cover of her official playlist 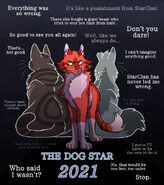 Houndheart on the TDS 2021 preview art

Flamesnout on the cover of Chapter 2

Houndheart on the cover of Chapter 3 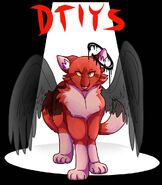 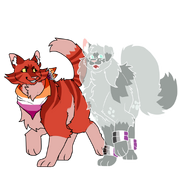 Flamesnout never got on well with her parents. For the most part, past the nursery, she raised herself. Quailfur was always snappy and rude, while Sparkbelly was just a plain boring dad. [3]

Flamesnout and her mentor could never seem to see eye to eye on anything. On patrols, on borders, on hunting and fighting techniques, on friends, on enemies. Flamepaw would often snap at Dawnmist that she’d rather live in RainClan, where Newtstar, the leader of RainClan that she’d heard so many stories about, lived. [4]

"I loved someone, from outside the Clans, and she was more wonderful than anyone I'd ever met before. And the elders hated her. Just because Hayfrost was born from Seedstar, just because she looked like her, they hated her. And I hated them."
—Flamesnout about Hayfrost The Dog Star, page 99

Houndheart: "Shellspring! What did you just do?"
Shellspring: "What did I do? You wanted cats to trust you more, so I helped you gain that trust. It worked, didn't it?"
Houndheart: "Worked?! You tried to kill Lichenstream!"
Shellspring: "No! I would never! I knew you could get it in time - it wasn't even that big of a rock anyway. Houndheart, I know you can benefit SnowClan, do good things! They all just didn't believe you until they saw it with their own eyes. I was... I was just trying to help you."
Houndheart: "You were lucky I made that jump. She could've broken her back or- or even worse!"
Shellspring: "It turned out okay! She likes you! She's fine! Can't you just focus on that already?"
Houndheart: "But it could've-"
Shellspring: "Everything's fine! I know what I'm doing."
Houndheart: "I don't think you do."
—Shellspring and Houndheart's fight The Dog Star, Pages 84-86

Retrieved from "https://warriors-ocs.fandom.com/wiki/Flamesnout?oldid=99052"
Community content is available under CC-BY-SA unless otherwise noted.