To make it easier to navigate.

Please do not edit anything above this message unless it is to add your tutorial to the list. Please place all new tutorials at the bottom of the page.

Ok, I'm here to teach you how to do a tabby and white cat! Let's start, huh? So the first step is to download the blank you're going to use, of course. I downloaded the StarClan blank. Now, go to your art program (mine is gimp, so things will be different on others) and click file (it should be at the top of your screen) / open / and then click on the blank you're going to click, and then open. A new tab will pop up, and in it, you'll see your line-art. It'll look something like that:

Saw the red circled small thing? This is the button used to create a new layer. Click on it. A box will pop and ask you about the size of that layer. Don't touch anything, just click 'ok'. Your screen will now look like that:

Do you see the black and white squares? Click on the black one, and a new box that will look like that will appear:

I circled the box in red. This is where you can change the colour you'll colour in. Change it from black to your base colour - I took some sort of fawn.

After you're happy with your colour, click on the 'ok' button, which I circled in red.

Now take the bucket tool (circled red) and click inside the cat. It will look like that:

Now create a new layer, and place it above the layer with your base colour but below the line-art.

See the things that I circled in red? The one that looks like a brush is named the brush tool. You're going to use it to colour... well, like a brush. The second thing, which simply looks like a circle, is the way your brush is going to look. This is a round brush with a 100 hardness. Now, just start colouring!

Oh well. It looks pretty hard-edged, huh? Take the smudge tool (circled red) and gently go over the edges of the white.

That looks better! Create a new layer, above the layer with the white but below the one with the line-art:

Now pick a colour darker than your base color:

Now take the brush tool again and probably turn the size down a little ( I used 4) and start drawing your stripes.

That took a while! I'm pretty proud of that pattern. But the stripes look pretty sharp, huh? Take the smudge tool again and smooth the stripes.

Create a new layer, above everything but the line-art layer, and a pick a dark colour. I chose a dark red. Now I'm going to colour with that colour (lol) in the shaded areas. I'm not too good at light sources, here is my attempt:

Now I'm going to lighten it by changing the opacity from 100% to something around 70%.

Yep, that looks better. Now I'm going to smudge my shading until I'll like it (I never like my shading).

It still doesn't look very good, but there's not much I can do about it. No, I'm going to add another layer, above the shading layer, and pick a colour darker than my shading colour:

And now I'm going to colour with it in the places that are most shaded. Here's my attempt (have I said that light sources are evil?):

Now I'm going to smudge and blur it (and lower the opacity, of course) :

Take the colour select tool ( circled red ) and click on the neon colour. Your screen will now look like that:

Click Ctrl + Shift + A, and your screen will change to that:

I went ahead and fixed some problems with the whiskers:

See that I circled in red 'file'? Click on it, and then on 'export as' and then give it a name. Save it, and then you're done!

Here is your finished kitty! Cloudy

Hello there! Today I'll be teaching you how to color in solid cats!

First, you wanna save the image. Check out the general info before coloring the cat.

Don't forgot to check Getting everything ready as well!

So, have you made another layer called Layer 2? Make sure it is under layer 1!

Now, get a fairly big brush and color everything in! 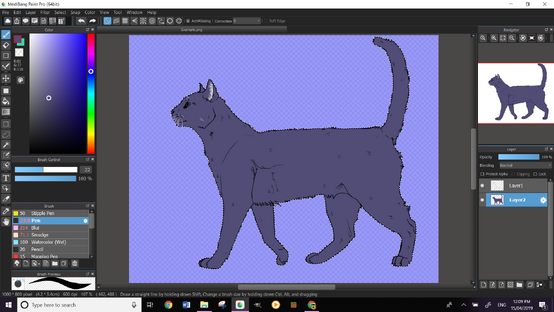 Create a new layer and drag it on top of layer 2. 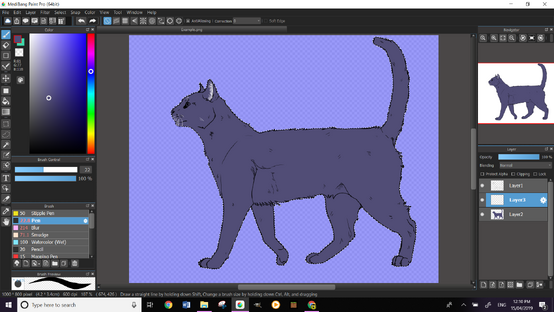 Now, get a medium-sized brush (I used 22 c:), and choose a lighter color than the base color.

Then, color the parts on the cat that are brighter/lighter. 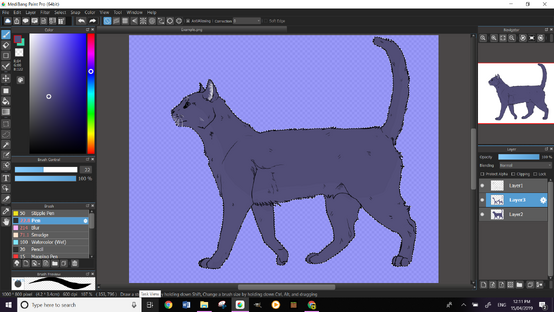 Now get a even lighter color and color in where more bright light comes from. 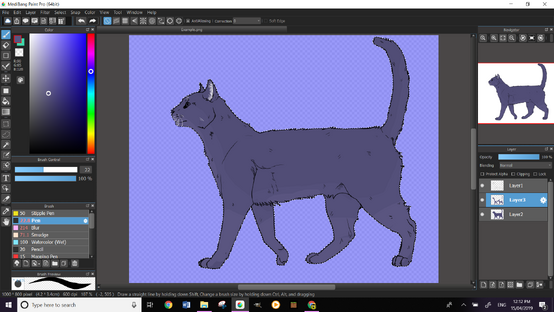 Now, get a darker color than your base color, and color in the darker parts.

Now, get a even darker color and color the spots where the darker light comes from. 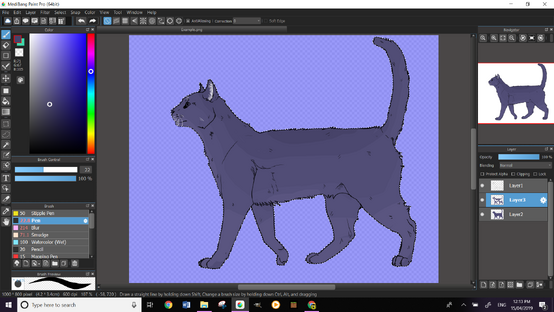 Now get a large sized brush (about 200) and blur the shading. 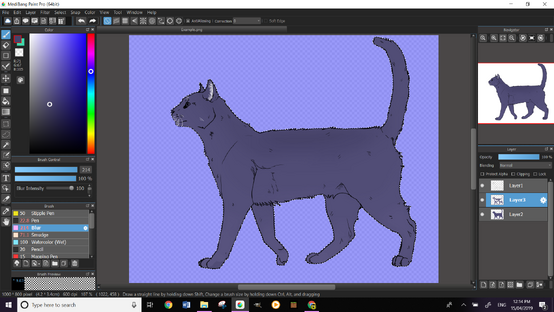 If you want to add any extra detail, go ahead! But I'm not sadly.

Time for the eyes!

Create a new layer and get the cat's eye color. Then color it in. 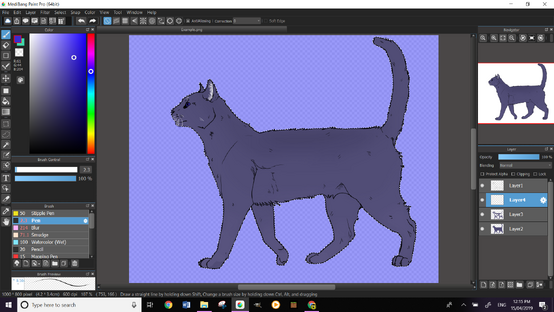 If you want to add a gradient-sorta effect, you can. Just chose a darker color and color the bottom of the eye, then blur it. 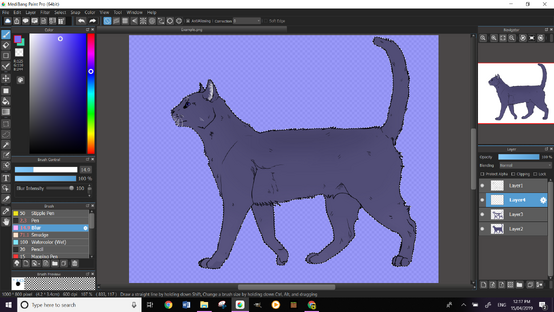 Now, the earpink. Create a new layer and get a pinkish-gray color and color in the inside of the ears. 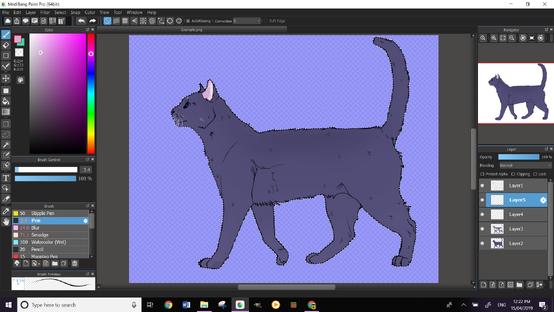 And there's your finished cat! 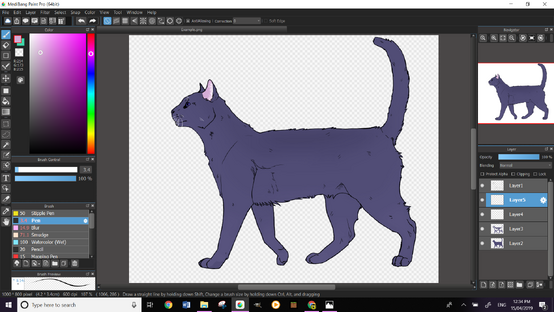 Hai, welcome to the second tutorial by Sandy! As you know, on some pages the StarClan blank has a white outline. But the normal blank is black. How do you change it? Well this is the tutorial for that!

First, obviously you save the image from Character Blanks, which is the StarClan one.

Next, you upload the file into Medibang Paint Pro. If you use another program, the steps might be different or similar. 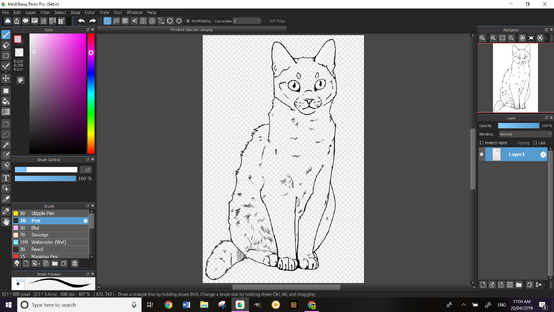 It's actually really easy. Near the blending and changing transparency area, you would see two words above the layer bar, called 'protect alpha'. 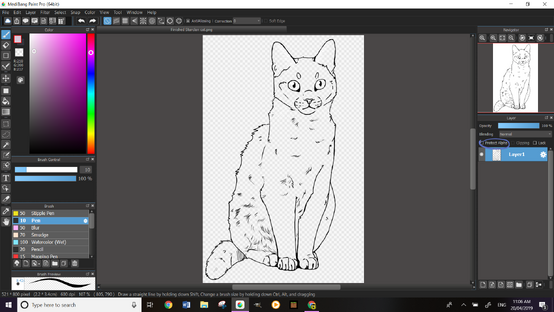 Now, click the little check box and a cross will appear. 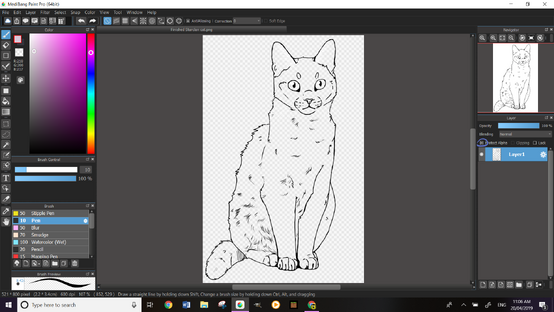 On your color palette, switch the color to pure white. 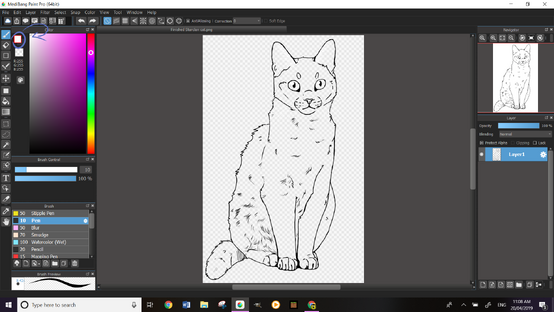 Now, get a large brush and color white on the layer (do NOT create a new layer)

Now you'll see that the StarClan cat is white outlined. Now color in the cat with whatever color you want (make sure you make new layers). Don't forget to add the shading, earpink and eyes! 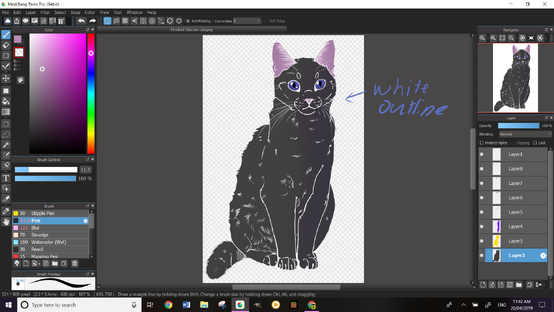 Edit: You can also do red for the dark forest blank!

This is a tutorial showing how I color eyes.

First of all, make a new layer on the bottom of the current one. Do not change the opacity. Let's use red / crimson eyes for this example.

Proceed to color your base color. (Your cat's normal eye color)

At the bottom side of the eyes, select a color that is visibly darker than your base. Color that color onto the bottom half - ish section of the eye.

Now with the topside, color it a visibly lighter color than your base. This time outline the pupil with that color.

Zoom out and see what it looks like, if you don't see a lot of your base, or it doesn't look good, proceed to the next step. If not, leave it as it is and you get your eyes.

Add as much base until you can see it.

It should look similar to this, after you add white to the top of the eyeballs. After that, you successfully made eyes!

Hey! I'm here to tell you how to change the line-art of one of the character blanks! :)

I'm going to sure how to change line-art of torn ears and bobtails.

Bobtails are cats with stubby tails. Naturally, or is a disablity. In this section, I'm going to do bobtails.

You wanna load in the blank in your art program. I use Medibang paint pro, and the leader blank.

Now, erase some of the line-art on the line-art layer. You can erase as much as you want. Be careful, you don't want to create a no-tailed cat! :P

Kinda have a glance how spiky the fur looks. If you picked a short-haired blank, it should be easier to form the bobtail. (TIP: Try to pick the brush size similar for better charart)

Erase the colouring from the tail.

Now add shading, and you're done! 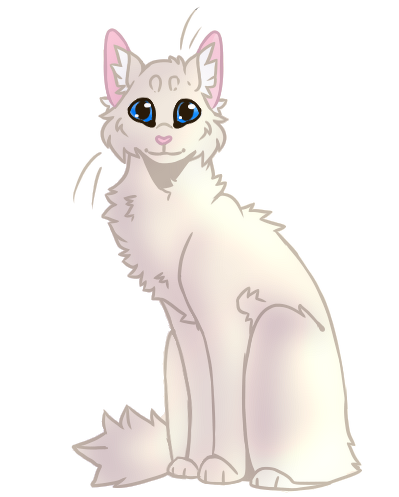 Get the image into your paint program. I'm using the kit blank.

Erase the eartip, however much you want the ear to be torn. I'm doing a small nick.

Draw the nick in.

Now, colour the blank in (add shading if you want), and you're done! 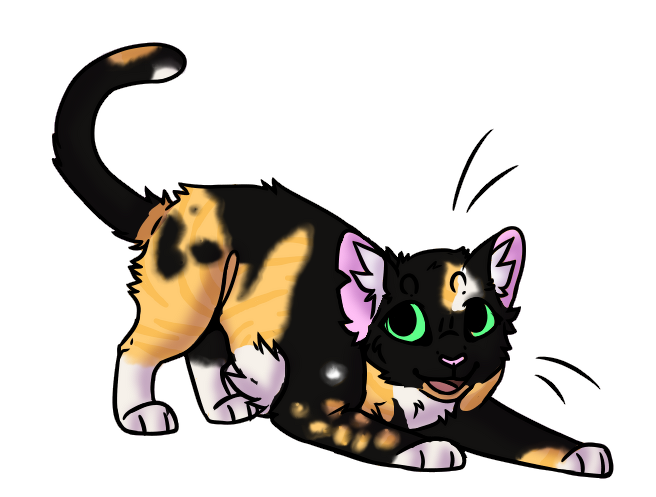 Retrieved from "https://warriors-ocs.fandom.com/wiki/Character_Blanks/Charart_Tutorials/Users?oldid=84449"
Community content is available under CC-BY-SA unless otherwise noted.